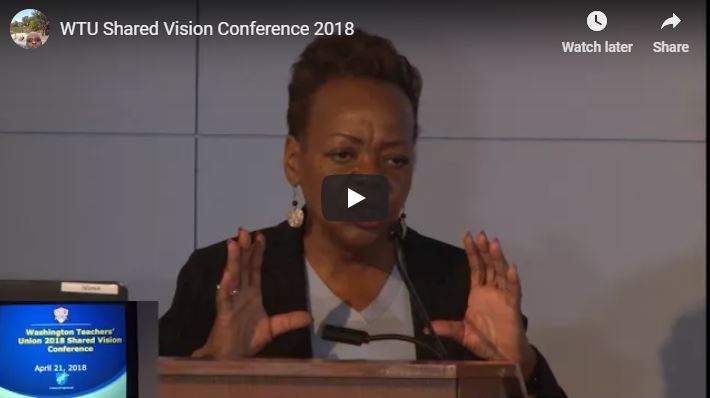 In partnership with the award-winning, innovative Algebra Project, the Washington Teachers’ Union Saturday, April 21, launched a citywide math literacy campaign in response to the growing achievement gap in DC public schools and to the 2017 National Assessment of Educational Progress (NAEP) report that found only 32 percent of 4th graders and 21 percent of 8th graders scored proficient or above in math.

The kick off was called the 2018 WTU Shared Vision Conference on Math Literacy, key to educational equity and excellence. It was held at the Kellogg Conference Hotel, Gallaudet University.

Through workshops, discussions and demonstrations, conference attendees explored award winning pedagogical techniques for teaching math developed by Civil Rights icon Dr. Robert Moses. Collectively, the techniques are called the “Algebra Project.” Students learn basic mathematical concepts that are key to making progress in everything from language literacy to logical thinking about any subject. Dr. Moses believes that educational equity is now the basic Civil Rights issue, just as the struggle for voting rights was in the 1960s. Both are fundamental to citizenship and empowerment.

The math literacy campaign includes a wide range of activities and a mobilization of teachers, parents, administrators and community members.

“We cannot sit on our hands and do nothing to reverse the abysmal test score results” said Elizabeth Davis, WTU president.

“We cannot wait any longer to address the leadership and instructional void that created the achievement gap starting a decade ago, when our schools were put under Mayoral control,” she said.”

Speaking at the opening plenary session 9AM on April 21 was Dr. Robert Moses, one of the most influential leaders of the Civil Rights Movement and the creator of the nationally recognized Algebra Project, which has successfully empowered thousands of minority students each year to embrace math literacy.

“Everyone said sharecroppers didn’t want to vote. It wasn’t until we got them demanding to vote that we got attention. Today, when kids are falling wholesale through the cracks, people say they don’t want to learn. We have to get the kids themselves to demand what everyone says they don’t want. Universal math literacy is, or should be, a civil right,” said Dr. Moses.

From the Mansfield (Ohio) News-Journal

“With public school education, really, we’re at the same position we were at 50 years ago with the right to vote,” said Moses, who spent the 1960s as a civil rights organizer, helping sharecroppers in the south learn to read and gain access to the vote.

Moses argues math is in the 21st Century what reading was in the 20th century.

“If you don’t have math literacy and you don’t have some kind of safety net, you’re going to end up in the same position or worse than the sharecroppers,” Moses said.

Moses said he was struck in the 1980s by the idea that with the shift from machines to computers, math and algebra was going to become available as an organizing tool in the same way the vote had become an organizing tool.

Based on this conviction, Moses started a nonprofit organization called the Algebra Project in 1982. The project began with an effort to get cohorts of students with the lowest performance in math ready to do college-level math by the end of high school.

The Algebra Project puts students at the center of math lessons, allowing them to discover mathematics principles themselves by approaching real-world problems using their existing vocabulary and in ways that are relevant to their own experiences.

The method flips the script of traditional math education. Instead of learning how to work math problems symbolically and then apply them to the real world, students start with a real world problem, form a sentence describing the principle in their own words and then write the sentence using mathematical symbols.

By teaching math this way, Moses discovered students who previously said “I don’t do math” began to see themselves as capable.

Since its inception, the project has grown to include pockets of educators across the country working to impact their own communities through math education and to start a national math literacy movement. One of those pockets is here in Mansfield.

Ohio State University-Mansfield’s Math Literacy Initiative based on Moses’s Algebra Project principles is transforming the way math is taught in and around Mansfield.

With grant funding from the National Science Foundation and the Ohio Department of Higher Education, the initiative provides professional development in Algebra Project concepts for teachers in Mansfield City, Galion, Crestview, Lucas and Clear Fork schools, with Bucyrus soon to join the project. Private school participants include St. Peter’s in Mansfield, St. Joseph’s in Galion and Discovery School.

Because of Moses’ work and his impact in Mansfield, The Ohio State University conferred upon Moses an honorary degree at its winter commencement Sunday Dec.19

Afterward, Moses will spend Monday through Wednesday meeting and working with educators and school administrators in Mansfield. Moses said he hopes the meetings will result in the formation of a regional alliance that can help the project obtain more National Science Foundation funding and start a nationwide network together with other regional alliances.

“There’s no demand for human calculators anymore, but there is a demand for people who can think,” McEwan said, so students need to be able to do algebra rather than just arithmetic.

But many students are already turned off by math by the time they get to high school algebra.

“It is very common to get out of sixth grade and have only been taught by teachers who hate math,” McEwan said.

Many of the teachers who have worked with the Math Literacy Initiative have come away with a new passion for math. They bring this passion back to their classrooms and become leaders of math education in their buildings.

Students in Mansfield are becoming more comfortable with an engaged in math at a young age, and it’s all thanks to Moses.