The demands of the protesters were clear: D.C. leaders need to give the city’s neighborhood schools more money.

The mayor’s proposed 2020 budget calls for an increase in education spending, but the boost does not keep up with rising personnel costs in schools. Bowser’s proposed budget allocates about $1 billion to the 52,000-student traditional public school system. That amounts to a 2.2 percent increase in per-pupil funding from the current academic year, but costs are expected to rise 4.3 percent.

Based on the mayor’s proposal for education funding, D.C. Public Schools Chancellor Lewis D. Ferebee distributed money to the city’s schools. Many campuses that serve significant populations of students from low-income families are projected to experience a decline in enrollment and, thus, face steep budget cuts.

“We cannot and will not settle for this outright disrespect placed on us,” said Mya Ballard, a senior at Anacostia High, a school in Southeast Washington that is expected to have 80 fewer students next academic year and is facing a budget cut of about $1 million. “We are the future.” 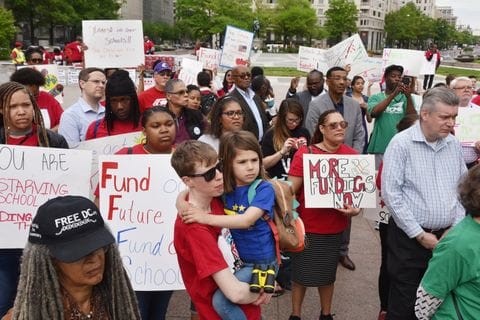 The protest, which was organized by the Washington Teachers’ Union, came a day after Ferebee defended his proposed budget in front of the D.C. Council.

They carried signs that said, “It’s time to use our outdoor ­voices” and “What if it were your child’s school?”

“Up, up with the teachers. Down, down with the cuts.”

And they delivered speeches on a makeshift stage in Freedom Plaza on Pennsylvania Avenue NW.

“We will continue this campaign until our schools are adequately funded,” said Elizabeth Davis, president of the Washington Teachers’ Union. “It’s wrong.”

During the past year, teachers throughout the country have protested and, in some cases, gone on strike. But most of those protests focused on low teacher pay and poor working conditions.

In Washington, teachers’ ire centers on what they perceive as the inequitable funding of schools, which they say strains campuses that serve students with the most needs. They said the cuts will make it harder for schools with dwindling enrollment to attract more students.

“Over and over again, we keep getting the short end of the stick,” said Chrystal Puryear, a teacher at Neval Thomas Elementary, a school in Northeast Washington whose students come mostly from low-income families. “The budget gets cut; people are let go; we are expected to do the same with less.”

[D.C. is thriving. Why do some school budgets appear to be shrinking?]

At a news conference Thursday about an unrelated education initiative, Bowser and Ferebee insisted the budget is equitable. They said individual school budgets do not reflect all the investments being made on campuses that serve low-income neighborhoods.

Increased investments in mental health services and support staff funded through the school system’s central office will help these campuses, the mayor and chancellor said.

Bowser did not seem concerned about the protest and suggested it was a natural part of the budget review process. The D.C. Council, which must approve the budget, is expected to vote on it next month.

“You call it a protest. I call it the budget period,” Bowser said. “Where people come out and express what they want to see in the budget.”

Randi Weingarten — president of the American Federation of Teachers, the nation’s second-largest teachers union — attended the D.C. protest, saying it was important that people associate Washington with more than the federal government and upscale neighborhoods such as Georgetown and Dupont Circle.

“What often happens in Washington is what happens in Wards 7 and 8,” she said, referring to areas of the city with the highest concentrations of low-income residents. “And that’s what this is about.”

Ferebee said the school system’s headquarters staff will shrink by 70 positions under a reorganization proposal. The central office workforce stands at 1,163 workers now.

“We’re here to say enough is enough,” said Markus Batchelor, the Ward 8 representative on the D.C. State Board of Education. “Enough is enough of the disinvestment in kids who need it the most.”