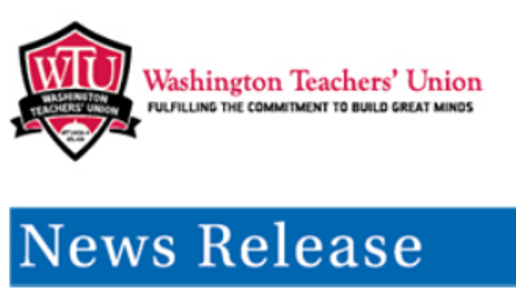 for Reelection to DC Council

“During his time on the DC Council, Robert White has stood up for stronger transparency efforts, led the charge to Save Washington Met via emergency legislation, and listened to teachers when we testified regarding the IMPACT evaluation system and its relation to high rates of teacher churn,” said WTU President, Elizabeth A. Davis. “We have worked closely with Robert White for the past 4 years and are looking forward to working with him in the future on the Council.”

The WTU announced its endorsements for Ward –based seats earlier this year, supporting:

“We are proud to endorse a strong group of local Progressive candidates who will work with educators to improve education and address the barriers that our students face across our great city,” Davis continued.

The WTU’s Committee on Political Education (COPE) is a member-driven committee that issued a questionnaire to candidates, conducted candidate surveys, polled WTU members, and presented its recommendations to the WTU executive committee. The WTU executive committee then presented its recommendations to the WTU Assembly where representatives voted to approve the endorsements.

"We need a government who will work for all of our students,” said Laura Fuchs, chair of the WTU’s Committee on Political Education. “The WTU believes this progressive group of candidates is willing to challenge the status quo and take a strong stand on behalf of our public school community."

Voters will head to the polls on Tuesday, June 2, 2020 for the DC Democratic Primary. The WTU will make endorsements for the city’s Independent at-large council seat and State Board of Education seats prior to the November general election.